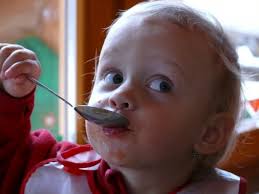 The importance of a good lunch

Rejoice in this election and Prince Andrew-free zone.
Instead, I have to pass on a snippet of conversation that might amuse and delight you as much as it did me. My 16 month old nephew came over from France where he lives with English mum and French dad.
He attends a nursery and, this being France, is already being introduced to the delights of freshly cooked meals, lovingly prepared by an in-house chef.
His daily routine is carefully logged and sent to his parents. His report, however, is always annotated with “TBM”. His bewildered parents discovered that this stood for très bien mangé – he ate well.
How he was getting on with the other infants, or his obvious burgeoning talent as a future nuclear physicist were not deemed worthy of any remarks. But he ate well.
The whole issue of institutional food is a perennial, er, hot potato. Hospitals, prisons and schools have all had their visit from Pru or Jamie. The foodie slebs turn up, sympathise with the people who have to create nourishing meals for less than the cost of a newspaper, and then generally head for the hills in despair.
Meanwhile, if you’re not languishing, starving and malnourished in your respective institution, as Salix Bureau reported only last week, obesity levels in the UK have doubled in twenty years. Obesity and its side-effects now affect nearly 13 million people in this country.
We’ve clearly got something very wrong here. The importance of a good, balance diet in the context of maintaining healthy lifestyles, recovery from illness and prisoners’ behaviour and children’s ability to concentrate are common knowledge. The French are clearly onto something. Introducing very young children to the importance of a good lunch – and a general appreciation of food – has to be a good start in anybody’s book.