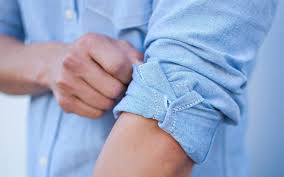 Roll up your sleeves and get the job done

Hats off to our local CCG this week and a healthy dose of common sense.

Our daughter attended a church service a couple of weeks ago. This, she freely admits, was more about getting out of the house and seeing some other people, legally, than fulfilling any spiritual needs.

It turned out to be fortuitous on two counts. First, she reported it to be a joyous experience, with good music and a welcoming environment. Much needed in these odd times especially for entrapped younger people.

Second, was that the  gathered worshippers were informed that local vaccinations were going well, but that occasionally there would be spare doses at the end of the day. And, that anyone, irrespective of age, might like to put their name on a list to ensure no vaccines went to waste.

And so, last weekend, thanks to our daughter’s presence of mind (and clearly having us down as very old), we got the call to attend a vaccination centre down the road.

We may not have had the joyous experience of attending church, but the atmosphere in the centre was nothing short of uplifting. Around a dozen cheerful, courteous, well trained and highly visible volunteers shepherded in a steady trickle of people. Queuing was minimal, and for a British audience, there was a notable lack of any harrumphing.

The air of quiet professionalism didn’t even invite any quips about “am I getting the Bill Gates or the Jeff Bezos microchip…” or  “have you got a Cambridge one please…?”

Then, all of a sudden, having been asked which arm you’d like to be jabbed in, we became happy members of a club that was willing to have us – albeit, not a very exclusive one.

A quick nod to the NHS app is due here – it made booking a second jab so easy.

Having resigned ourselves to further weeks of tedious monastic isolation, (and clearly this is no licence to abandon lockdown rules) the sense of relief has taken us both by surprise. As has the sheer common sense of the arrangement.

Speed and efficiency of the operation being one thing, that it was as a result of some sensible and pragmatic action by the local CCG is remarkable.

From a communications standpoint, this experience which took place in the hugely multicultural area of South London, demonstrates the efficacy, and need, for a highly granular (and cost effective) approach to reach diverse pockets within local communities.

One hopes that every local church, temple, synagogue and mosque across the country is being approached to take a similar course of action.