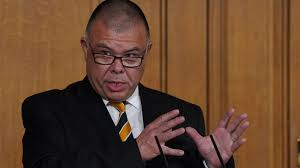 It’s been a veritable land of milk and honey for metaphor lovers recently. Simile-philes will have been like kids in a sweet shop come to that.

It’s all thanks to Deputy Chief Medical Officer, Professor Jonathan Van Tam who has had the unenviable task of appearing on the telly to advise us all to stay home, protect the NHS and I can’t remember the third one.

No doubt with the best of intentions, but possibly a little unwisely, he has resorted to some distinctly non-scientific language.

“We’ve seen the swallow but this is very much not the summer” he said, trying to limit expectations of the latest vaccine breakthrough.
Hang on a minute. Perhaps best not to mention the summer that virtually nobody managed to enjoy?

OK, so how about something a bit more earthy? Sport?

“It’s the play-off final and it’s gone to penalties. We’ve stepped up and scored the first one. It doesn’t mean we’ve won the cup, but it shows the keeper can be beaten. That’s basically where we’re at in the fight against coronavirus“, he said, again, attempting to temper the breathless enthusiasm of Messrs Johnson and Hancock about Pfizer’s new medicinal compound.

Oops! The country’s millions of footie fans have, for months, been starved of their fix on the terraces.

Time for Prof Van Tam get himself back, er, on track as it were. Transport.

“This to me is like a train journey, it’s wet, it’s windy, it’s horrible. And two miles down the tracks two lights appear and it’s the train and it’s a long way off and we’re at that point at the moment. That’s the efficacy result….” Then, rather like the delayed 7.42 Southern Service from Balham to Victoria, he rattled on about trains slowing down, stopping and the hope that not too many people would scramble aboard.

Train journeys, eh? Remember them? Another experience denied us this year – albeit, not one many would miss.

Metaphors are, yes, bread and butter to political language. They provide an unconscious, but immediately recognisable emotional association to the listener. It’s a “steep and rocky path to Brexit”. “Drain the swamp” suggested Trump. Yup. Got that.
But, make the reference too glib, or too arcane and you run the risk of diminishing the power of a serious message.

Take note then, that meister of metaphors, B Johnson. We may have momentarily forgotten the delights of live football, train journeys and summer but we can at least still relate to them.

BJ’s fruity tones going on about “vital arrows in our epidemiological quiver” might have missed the mark a bit. The phrase is difficult enough to write, let alone say. As for “…the distant bugle of the scientific cavalry coming over the brow of the hill… that toot of the bugle is louder. But it is still some way off.”

Given the current sensitivities around all things military and a climate of wokeishness, some may consider his choice of words, redolent of Empire, Waterloo and the playing fields of Eton, are also some way off.

Still, at least those who wouldn’t know one end of a bugle from an epidemiological quiver would probably recognise what a toot was.

Talking of rich, fruity tones, it’s worth reminding ourselves of former MP, Jonathan Aiken, mixing his metaphors when defending his perjury charge. “If it falls to me to start a fight, to cut out the cancer of bent and twisted journalism in our country with the simple sword of truth, and the trusty shield of fair play, so be it. I am ready for the fight,’ he said. He got 18 months. Should’ve got life for that M’lud.

The metaphor for JFK’s administration was Camelot – (the Arthurian one, not the musical.) While this wasn’t entirely complimentary, it did at least make it look quite edgy. The shenanigans in Number 10 invite metaphors that invoke disorder and toxicity.

Depending on who has just been seen leaving with a box of belongings, the place is a viper’s nest, a circus or a rudderless ship.

Perhaps because it’s only a few more sleeps till Christmas, but honestly, isn’t the whole thing more of a pantomime?

Except that, Oh, no it isn’t this year. Panto’s set to be another stolen experience.

So, just for you then, here’s a reminder of what a good panto should all be about.