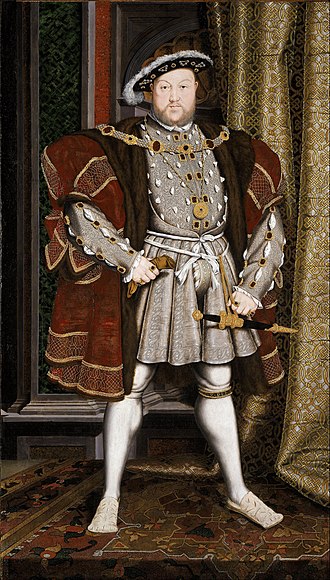 In 1546, John Heywood wrote
“As you be muche the worse. And I cast awaie.
An yll wynde, that blowth no man to good, men saie.
Wel (quoth he) euery wind blowth not down the corn
I hope (I saie) good hap [luck] be not all out worn.”

Which essentially translates as, ”it’s an ill wind that blows nobody any good…”

Heywood penned this when Britain was also in a pretty tumultuous period. Henry VIII, who was to die the next year, had been busy breaking taboos and changing many things for ever. Creating a new normal if you like.

Henry was a man of extremes. His girth, his temper, his polygamy. And his largesse. In time honoured tradition, his munificence benefitted some more than others. Being part of his courtly entourage was a must if you were to stand any hope of social elevation and financial benefits that would bring. It was a bit of a precarious existence. Those who displeased His Royal Highness were not handed their possessions in a cardboard box and told politely but firmly to leave. Being out of favour for his special advisors tended to end badly. But, keep abreast of the political mood, keep your enemies very close, laugh at the Royal jokes and before you know it, you could end up finding yourself owning a fair chunk of East Anglia.

Court in the act
The wind of change currently blowing the pesky virus around the country also carries the distinct whiff of Tudor-age cronyism.
A court arrangement that King Harry himself would recognise, seems to be alive and well in Downing Street. It’s got the lot. A larger than life polygamist holds the reins of power. Infamy and treachery abound. There is (or was) a loathed but powerful Cromwellian fixer, and a female figure, close to the top dog, whose displeasure it is unwise to invoke. The handing out of nice little earners is also rife.

Since the beginning of the pandemic and the mad scramble for PPE, normal NHS procurement procedures have been summarily waived. Desperate times, desperate measures and all. As the PM said, there was a need to “remove blockages to the procurement process”. Nicely put.

Seemingly though, it helps grease the wheels of commerce enormously if you are a chum of a government minister – otherwise known as a ”high priority channel”.

During the first six months of Covid, the government paid out £10.5bn in contracts without going to competitive tender. As governance experts have pointed out, in normal circumstances companies with links to “politically exposed persons” would be considered high-risk, rather than high priority.

Only this week, it was reported that Matt Hancock’s former neighbour and pub landlord (of the Cock Inn – no, really!) mysteriously ended up with a fat contract providing medical grade vials having had no previous experience in this. There is a growing list of people for whom the Covid wind has blown great fortune.

The good news is that the National Audit Office is all over it, releasing a report that drily suggests that there is a markedly fishy aroma about some of the excessive contracts handed out.

There is a conundrum here though. Any business owner who has endured the exasperating experience of wading through the NHS or other public sector’s achingly slow, labyrinthine procurement procedures, could be forgiven for fist pumping its demise.
Like it or not, it has been the ingenuity, energy and agility of the private sector which has resulted in Nightingale hospitals being built in remarkably short order, ventilators being manufactured from old Formula 1 spare parts and vaccines being produced.

Test and trace may not yet have been a glorious example of private sector endeavour, but under the old system, the companies running it would still be waiting for a purchase order at this point.
Eyebrows were raised – rightly – about the £670k spent on communications consultants, Admiral Associates, to support Kate Bingham’s Vaccine Taskforce. Actually, it doesn’t work out at much money relative to the experience of the associates and the scale of their task.
The bigger questions are why there isn’t the talent within the civil service to do what they’re doing? And, how sensible was it to let unelected Kate Bingham, wife of a Conservative minister and a venture capitalist, to do the appointing?

Covid and Brexit conspire to make a gloomy outlook. Our PM and his government urgently need to restore the trust of the electorate more than ever. While public sector procurement processes need to be streamlined, trust will not be earned by simply by handing out a few choice contracts that benefit a lucky few.

We’re told that the PM is now setting about Number 10 with a new broom, opening a few windows, and letting in some fresh air. Watch out for delivery of industrial quantities of Glade and Febreze to get rid of the fishy smells that may otherwise linger for some time to come.