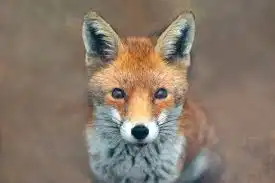 News this morning that the crime of the century has at last been solved. Thanks to a combination of good old fashioned investigative work including door-to-door enquiries, and the latest infrared surveillance technology, a thief who has been taking the daily copy of the Times from our doorstep, has been identified.

Although not yet apprehended, a female of no fixed abode, but known to locals as Missy Reynard, was filmed at 4.16am picking up the newspaper and taking it away. An extensive hunt for both the miscreant and the numerous missing copies is underway.

Yes, thanks to the inspired birthday gift of a Chris Packham-style infrared, motion sensitive camera, Insight now has irrefutable evidence of a vixen regularly coming to help herself to our morning paper. (The real villain of the piece is the Times delivery team who seem incapable or unwilling to take the extra single step to put the paper through the letter box. A first world problem if ever there was one.)

Having the Times delivered each morning is not only a work related necessity but a joyful, tactile experience in an otherwise exclusively digital day. Document printing has, quite rightly, been banned in the office. As someone who has had to be dragged kicking and screaming into a digital world, the NHS could take note that it is actually possible, and in many cases preferable, to go paperless.

The infrared camera has revealed a lot of animal-related footage that would be worthy of Springwatch. Or possibly Crimewatch. Our doorstep, it turns out, is less of a drop in library for news-hungry animals and more, a popular latrine for a variety of animals. The sight of next door’s ginger Tom doing his business in the porch provoked some very unPackham-ish thoughts that would upset the Cats Protection League.

Looking at the footage again, it struck Insight  that the nocturnal goings on in a South London suburban doorstep is really not that different to the latest shenanigans in Whitehall.

Someone else, who has been skulking around his lair in the bowels of Downing Street, is now also of no fixed abode and has been caught stealing headlines. Since being turfed out onto the streets, the vulpine Mr Cummings has been marking his territory and doing his best to leave a stinky mess behind him.

The thing is, he could learn a thing or two from the behaviour of the real foxes. Their criminal activities are admirably perfunctory. Up the steps, take the paper, deposit a highly malodorous calling card and off. The seven thousand word dirge that was Cummings’ pointy-fingered rant largely failed to hit its mark despite containing some pretty incendiary material.

Despite his overt attempt to shame Johnson and Hancock, the question we should be asking is who on earth is advising our public leaders on basic communications protocols? Rule number one: Accept that everything you tweet, write or say will at some point be available in the public domain. WhatsApping that Hancock is “totally f***ing hopeless” maybe true – but it’s not exactly statesmanlike language.

It was at least commendably brief in comparison to Cummings’ tediously long missives. Rule two: Keep it brief. Who has the time or dexterity to tap out wordy WhatsApps like Cummings? Presumably, the same person who has the time and energy to bang out seven thousand words when a few hundred might have had more impact.

Less is frequently more. As Missy Reynard would attest.

(You can see the Crimewatch video here)