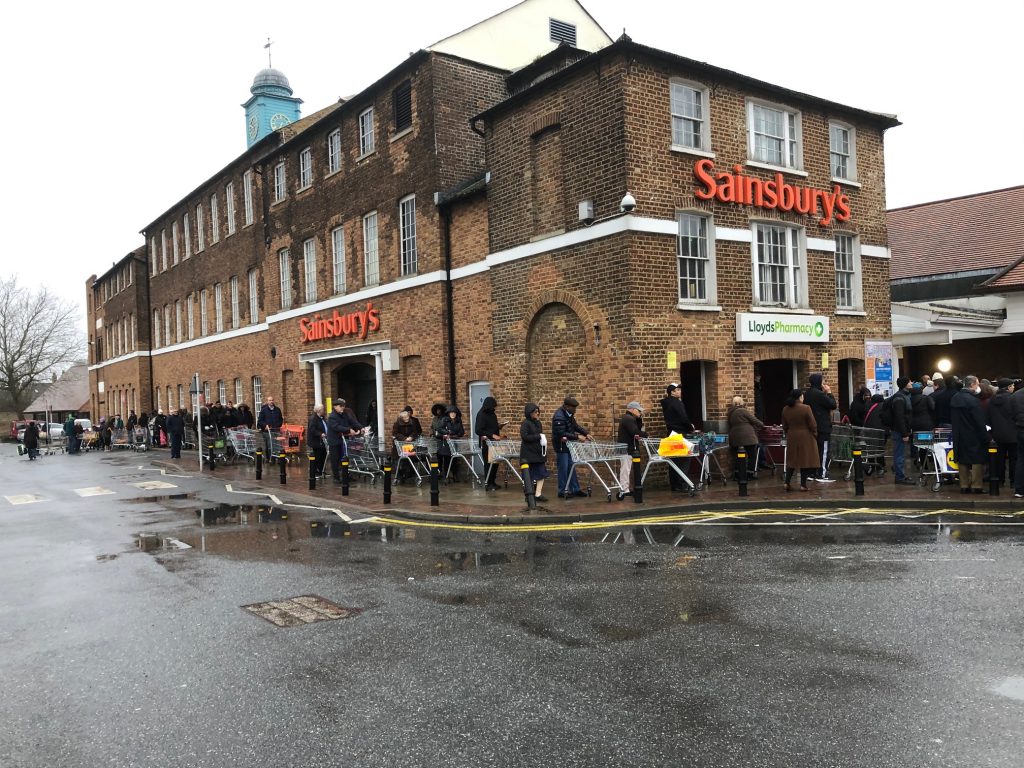 Oh for a bit more Brexit…

“Unprecedented” and “seismic” were phrases commonly used to describe the events around the relatively recent Parliamentary and Brexit shenanigans. Remember them? Suggest we’ll all have to re-calibrate our analogies after this little lot.

How are you coping? Scary isn’t it? Do you find yourself wishing you could tune into the radio or telly for a good old debate about Brexit? Or, how about a general election or the US polls to fill the media? Even the Middle East?
Say what you will about the mind-numbing tedium of all that Brexit coverage over the last two years, you could at least still buy comestibles and household cleaning products as and when you wanted. Even self-imposed isolation might be a bit more bearable if you knew the supermarket shelves would always be stocked, or you can order something to be delivered. Now, parts of the country resemble Cold War Moscow. A trip around Sainsbury’s is a decidedly dispiriting experience. People are queuing for food, loo paper, paracetamol and Dettol. And pasta.

Nostalgia ain’t what it used to be
A common reference point for the current period of mass uncertainty, is pre-war Britain. In the lead up to 1939 and for a while during the “phoney war”, the real, visceral fear was of an invasion from Germany. Much of life continued as normal – people went to work, got paid and shopped. Some people left the cities and children were evacuated. But life was a bit smaller then. No supermarkets or finely-tuned supply chains dependent on just-in-time logistics. No freezers to fill through panic buying. There was social media, though. Rumours and falsehoods were rife – albeit generated by word of mouth from the bloke down the pub.

Life – but not as we know it
We’re told the supply chain will catch up – but it’s been proved to be very precarious. And, will we now rethink how we do the most basic things we’ve done for ever? Already, meetings are hugely more efficient using an online platform or phone. Who wants to travel on the Tube if there’s any way to avoid it? Teachers are still out on whether remote learning will emerge as viable but there may be some profound changes to the way we educate children. How will people cope being cooped up for longer periods together, as in an eternal Christmas but without the presents and TV schedule?
Would a more robust health and social care system have been better able to cope with something like this?
Already then there are some good things to consider: Our street, like many across the country, has mobilised to help our known vulnerable and isolated neighbours. The parks seem to be full of people running, walking and exercising. The blossom is out and the rain looks about to abate.

Good grief! Have just realised I haven’t talked about the weather for about two weeks! It must be serious…