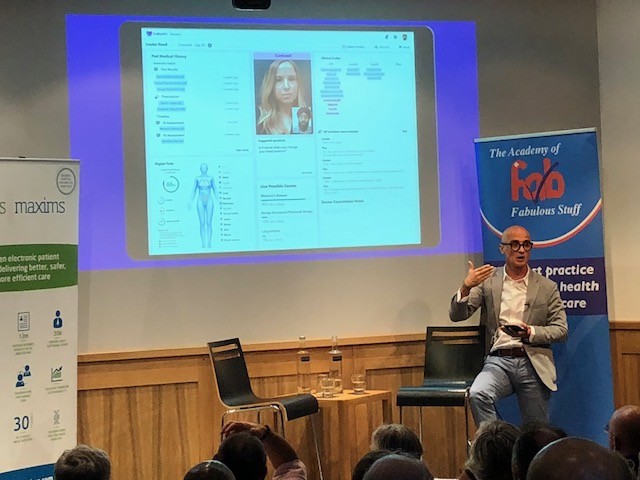 Given the opprobrium Babylon and GP at Hand has received in the trade press, Ali Parsa might well have been justified in feeling a bit uneasy about being Roy Lilley’s latest Healthchat interviewee. A large audience, both live and online, always includes health professionals, clinicians and commentators from across the sector. So, Parsa’s very appearance could well have generated another furious feeding frenzy from those who vehemently oppose what he is doing. As it turned out, the evening even included one London GP saying she’d be happy to pay for her practice to have GP at Hand out of her own pocket.

The power to persuade has been a theme that seems to have defined Parsa from an early age. His back story is as remarkable as it is chilling. At 16, Parsa left Iran, on foot, to get to Britain via Pakistan and Germany. Arriving as a penniless refugee in London, he not only taught himself English in six months, but also managed to cram in O and A-levels and get a university place at UCL. All within two years.

Politically left-leaning, he rose through the ranks of the National Union of Students. But, it was while he was undertaking his PhD that the latent entrepreneur emerged to sell Greek cultural holidays to Guardian readers. “It was only ever meant to pay for my PhD,” he said.

Another business venture and a foray into investment banking, while proving lucrative, did not fulfil him spiritually and, following a spell of paternity leave, decided to leave banking and set about changing the way healthcare was delivered. Circle Health and a number of beautifully designed hospitals followed until, after the debacle that was Hinchinbrook, he got out of hospitals and founded Babylon. Why Babylon? “I’m too cheap to pay an agency to come up with a name,” he says – but like everything else about Parsa, it wasn’t quite that simple.

As well as his geographical connection to the ancient city of Babylon, it also turns out that any sick Babylonians would have to appear in a central square where it was the duty of other citizens to share and record their experiences with the sick. It led to a sort of civic memory which helped Babylonians to enjoy longer lives than any other ancient civilisation. Ring any bells? It should do because the AI technology used in Babylon adheres to the same principle of continual learning.

Parsa seems genuinely perplexed by the vocal antipathy towards GP at Hand. He says that the accusation of cherry picking younger, fitter patients doesn’t add up financially – that the Carr-Hill formula is there to address any imbalances. Plus, if it’s keeping more people away from A&E, there’s a wider system cost benefit. Will Babylon ultimately destroy the traditional system of general practice? Well, do we think general practice is working well as it is? “M&S isn’t failing because of Amazon,” he says, “ M&S is failing because it’s a bad business. John Lewis does well because it’s a better business. Patients won’t leave a good practice – but too many GP practices are simply bad.”

Some might question whether the 30 odd thousand new patients GP at Hand has attracted from a potential pool of many millions, especially given their acquisition cost (high profile and sustained ad campaigns across greater London’s transport systems) is really proof that this is what people want, especially as indications back in June were that one in five GP at Hand sign ups chose to go back to their local practice. But as many will wonder why this kind of disruption has been so slow in coming. Salix client, eConsult, the leading GP-founded digital triage tool in primary care, has also been vocal in advocating digital acceleration (Times paywall I’m afraid) as a means of opening up access to general practice.

Parsa also seems resigned to the curiously British resistance to accepting anything different. He cited Alexander Bell giving up trying to market the telephone in Britain opting for the more forward thinking USA. The UK represents a very small part of Babylon’s growing worldwide business – the implication being that we risk losing out in a genuinely life changing business that could democratise medicine and arguably let GPs play a far greater role in health creation rather than disease management. Few would argue with that.